A Cowardly Act by the U.S. Marshalls Office in Weastern North Carolina 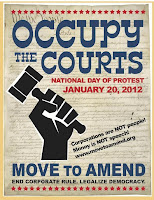 Regular readers of this blog will know that I am actively involved in the Occupy movement in Western North Carolina. I know....it's not like being at OccupyWallStreet, or in Oakland, Chicago, Boston, LA, or any one of more than 900 Occupy groups around the world, but you work with what you got, right? This is where I live, this is where I occupy....and, I believe the people of Occupy are at the leading edge of consciousness on this planet at this time.

What we are seeking in the movement was shockingly brought home to me over the past few days. OccupyWNC is one of many Occupy groups across the nation that is working with Move to Amend, a national day of action just one day before the second anniversary of the infamous Supreme Court decision in Citizens United v. Federal Election Commission, which held that corporations (as people entitled to the rights of the U.S. Constitution) can spend unregulated and undisclosed sums of money in order to influence elections. [There are] over 80 rallies at federal courthouses around the country, including the U.S. Supreme Court in Washington, D.C.

On Friday January 20th, we are occupying the Bryson City Federal Courthouse, the closest federal courthouse to us.

We're in a rural mountain area where everyone, even if you don't know them, is your neighbor, so we have not used the same tactics that are sometimes used in bigger cities. We followed the rules in applying for our permits. The Bryson City Police Department was a pleasure to work with and I had a great talk with Chief  Rick Tabor, and we had no problem securing a permit to demonstrate on the city sidewalk.


I then continued the process by contacting the Asheville GSA offices who manage the Bryson City Federal Courthouse. From there I was directed to contact Inspector Greg Erdley who is with the Dept. of Homeland Security Federal Protective Services. Needless to say, I was apprehensive about calling and getting involved with the DoHS. When Inspector Erdley returned my calls, he indicated I should talk to the Bryson City Federal Courthouse property manager, Michael Caldwell, with the Asheville GSA.
Initially, we connected by email and Mr. Caldwell sent me the application for the permit. I completed and returned the application by email (attached). A day later, I received a call from Mr. Caldwell and Inspector Erdley informing me of a court order over riding any permit the GSA might give us. They were kind enough to send me a copy of the court order prohibiting any kind of rally, demonstration, or parade on Federal property. Upon inspection, I was shocked to find that the court order was issued in 2003 and was apparently still active. Talk about legislating from the bench! Also, From the wording of the court order in the fourth paragraph, it appears that the U.S. Marshall may stop the rally altogether, even if we're not on federal property, even if we have a city permit. This is exactly the kind of inequality OWS is talking about.
Here I was, being denied my civil rights to demonstrate and address my grievances with the Federal Government of the United States of America, the land of the free. EXCUSE ME...it's not the federal government that owns these properties, it's we the people.
When I asked Mr. Caldwell and Inspector Erdley if we could include their organizations  (the GSA and the Dept. of Homeland Security) on our flyer supporting Move to Amend, there was a deadening silence...The agent began to explain that as Federal employees they could not take political stands, and I said "relax, guys, I'm pulling your leg"...followed by a couple more seconds of silence and then they both broke out in laughter.....Both good guys, and I think we made a couple of friends. They were both polite, friendly, respectful, helpful, and, in my judgment, somewhat apologetic about the court order.
OccupyWNC is an affiliate with the national Move to Amend organization, and we had been directed that if ran into any problems with permits, to let let them know. Apparently, Move to Amend is working with the ACLU for just these kind of unconstitutional actions by the government. I prepared a letter describing what had happened, attached the court order, and sent it off to the legal team at Move to Amend.
Move to Amend and the ACLU has been successful in getting other like court orders overturned, but doubt they will be able to do it by Friday the 20th.
So, as our local Occupy group meets over the next few days to prepare for our rally at the courthouse, one of the things we'll undoubtedly be talking about will be whether to use civil disobedience and occupy the federal court grounds, anyway.
And we thought our "building bridges" tactics would work...Maybe locally, but apparently not with the feds. This all comes after President Obama signed the NDAA (National Defense Authorization Act) on New Years eve---while everyone was getting ready to celebrate and not paying attention---which allows American citizens to be indefinitely detained without the right to counsel (nervous laughter...here's where I joke about winning an all-expense paid vacation to a FEMA camp located somewhere near all of us).
So, here's my challenge to you: I know a lot of people want to create their own reality and don't want to think "negative" thoughts. But if you don't get up and join us, and stop this now, you will be creating your own reality, and you won't like it. Time to reach down and warrior up. Show up at the Bryson City Federal Courthouse on this Friday, Jan, 20th, from 11am to 2pm and stand with us.
Last, this: 2011 will be remembered as a year of revolution, the beginning of the end for an unsustainable global system based on poverty, oppression, and violence. In dozens of countries across the Arab world, people rose up against broken economies and oppressive regimes, toppling dictators and inspiring the world to action. Popular rejection of austerity measures and attacks on worker's rights brought millions to the streets in Greece, Iceland, Spain, Portugal, Italy, the UK, Chile, Wisconsin, and elsewhere.
Fueled by anger at the growing disparities between rich and poor, frustrated by government policies that benefit a tiny elite at the expense of the majority, and tired of the establishment’s failure to address fundamental economic inequalities, OWS offered a new solution. They built a People’s Kitchen to feed thousands, opened a People’s Library, created safer spaces, and provided free shelter, bedding, medical care, and other necessities to anyone who needed them. While cynics demanded they elect leaders and make demands on politicians, they were busy creating alternatives to those very institutions. They were busy creating the new model of what this country should stand for They were busy creating the world most of only talk about. "A revolution has been set in motion, and we cannot be stopped."
And if you don't show up, don't ever talk to me about change, again.....It's not like you have to camp out.
Posted by Gary Stamper at 8:46 PM

Nicely said, Gary. I carry the first amendment in my purse. "Congress shall make no law respecting...abridging the freedom of speech...or the right of the people peaceably to assemble and to petition the Government for a redress of grievances." Unfortunately, my understanding of employment by the state of NC is the same. One is tacitly required to have no opionion.

"Unfortunately, my understanding of employment by the state of NC is the same. One is tacitly required to have no opinion."

Not sure why it's unfortunate. There times and places where it's appropriate and not. I wuz just Playin'! :)

Update: A day before the rally, I was notified by the GSA that another court order had been issued allowing OccupyWNC to assemble on the Courthouse parking lot. Thanks to Michael Caldwell of the GSA for helping us with this.