WILL THIS BE THE LAST CAR I'LL EVER OWN? IT'S FOR SALE. 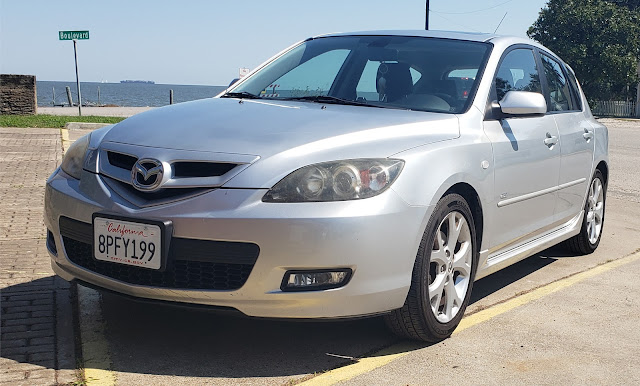 I grew up in California so my affection for cars was almost predestined. When I was in high school I drove a 1938 white ford pickup with a hopped-up '53 Merc flathead with a 3/4 high lift cam with two Stromberg carburetors, and headers hooked up to a Cadillac LaSalle transmission. 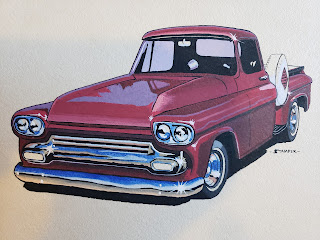 When I was a senior in high school, I graduated to a 1958 Chevrolet Pickup that my Dad and I worked on. We added a cam and two 4-barrel carbs to the 283 ci Chevy V8 and 4.10 positraction rear end, threw some sandbags in the back of the bed, and Voila! I was supposedly the car to beat!

Custom paint, black tuck ' roll upholstery, stained wood bed deck, matching tonneau and spare tire covers, Hurst shifter on the floor, lowered, chrome wheels... you get the idea. The image at the right is a painting I did of it while still in high school. Some of my classmates who see this will likely remember it.

Had a '53 Merc Woody in college and used it to go to Santa Cruz and Stinson Beach north of San Francisco to surf what we later learned were great white shark-infested waters. Today I never go where I'm not at the top of the food chain.

A brief stint as an automobile design major in college (I changed majors when I realized I'd have to live in Detroit), taught myself custom pinstriping when I opened my first sign shop, hand lettering NASCAR race cars, owning a series of custom cars throughout my life... all coming to an end.

Some of the cars I've owned - a story behind each one.
Part of Bocas Del Toro is an archipelago of six larger islands and dozens of smaller ones. There are very few cars on the islands and people get around largely walking, riding bikes, or taking 1-$2 water taxi rides. You just don't need a car and I love that! Besides being good for the environment, it's also healthier.

Who knows? Maybe my next vehicle will be a cargo bike to bring groceries from one of the Supermercados or just trekking around the islands while listening to reggae on my Bluetooth ear buds?
Sounds pretty good to me! 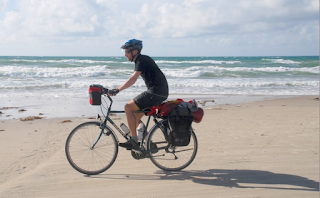 Gary, I left you a message on FB. Jimmy.

We have been without a car for close to two years now. Cheap taxis and city buses and feet do the job quite well! But we miss hopping in a car and exploring.