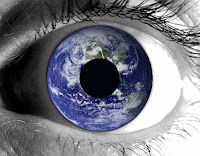 Shamans have always been able to "walk between the worlds," access the unseen, and experience visions in altered-state consciousness. In fact, the shaman is the master of subtle states of consciousness. The Shamanic Priest is the highest expression of the Magician Archetype, and I am a Shamanic Priest

I do not claim to be a shaman, although, like all of us, I do believe there is a "shaman within" each of us, and I do use shamanic techniques to access these altered states of consciousness for my self and others. As of yesterday, I am officially a Certified Breathwork Facilitator.

Visions are not new territory for me as I've had several over the past few years, mostly while doing Shamanic Breathwork, some in dreams, and one in broad daylight. A couple have actually come true, and most have not.....yet.....So, I've had visions and I've helped others access visions, as well.

So I approach these experiences with an open mind and a touch of skepticism, wondering how much of these altered-state visions are really visions and how much are actually constructs, created by my ego? Now, Shamanic Breathwork is supposed to get our ego out of the way so that our soul can talk to us. When I'm able to fully access my soul's purpose, or source, I consider that I have also accessed the sacred. I honestly believe that it does happen....I also believe there are times when I'm unable to get my ego out the way and that I "make stuff up."

Jung's Active Imagination process is an example of this, and is still used today. The point is, what is "made up" and what actually comes from source? And, is there a difference? Where does creativity come from, anyway, if not the Divine? Many, including me, agree that it stems from the causal state of consciousness. I believe, for example, I can tell what is and is not made up by the intensity of my breathwork experience and whether I have to "think things through" or not. In other words, am I in control of the vision, or is it in control of me?

One vision I had a couple years ago involved the collapse of the financial system. Because of that vision, I moved to North Carolina three months earlier than originally planned so Anyaa and I could get our new house financed. We got our construction loan closed two weeks before the collapse. We would not have acquired that loan after the collapse.

This whole blog article is to set up my telling of this "dilly" of a breathwork journey, and subsequent vision during that breathwork, of a few days ago. I've created a mandala around it, and processed and integrated it with my teachers and fellow participants. I am convinced, if it isn't a true vision of something to come, it's at least a dire warning of what's to come if we don't get our act together on this planet very, very soon....if it's not already too late.