What is the New Masculine? 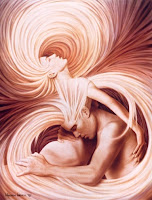 It seems to me a critical aspect of the work to be done on the planet at this time is to heal the wounds of the masculine and feminine. A lot of the work my partner Anyaa does revolves around helping women who have become overly "masculinized" to reclaim their more powerful, integrated feminine, which includes the masculine. My work revolves around helping men who have become overly "feminized" to reclaim the healthy aspects and fullness of the New Masculine without shame and on purpose with a clear sense of their sacred mission.

In an earlier post, I asked, "who are the models for the New Masculine?" in this post I want to address the definition of this "New Masculinity."

Okay, we may not necessarily know who they are, but what does this "New Masculine" look like? What are the qualities that define the New Masculine and how is it different from the old masculine?

The masculine, directional and focused, is defined and guided by the search for freedom, cutting through all obstacles in his path. But not everyone uses masculine energy to search for that freedom in the same way.

David Deida says that how a man seeks freedom depends on his particular needs, and those needs typically change in three stages.

Beautiful. What the hell does that mean?

It means no longer being dependent on someone else's opinion of him, although he can relax into a deep listening state when someone offers counsel. It means being able to hold space for family, friends, a partner, the world. it means being in service to the world without negating his own needs in a codependent way. It means saying "no" sometimes in a loving and compassionate way. It means living at his edge, always pushing himself to be on purpose, giving his unique gifts to the world, whatever they might be. It means challenging other men, and himself, to give up the things that limit surrender into gifting.

It means having his mission aligned with his life, filling his core, and it means having a deep spiritual awareness, not dogmatic drivel. The new masculine penetrates the world as he penetrates his woman, not merely for pleasure or personal gain, but to magnify an open heart, love, and depth, again, his gift to the world.

It also means being able to move freely, at will, between masculine and feminine qualities that serve the perfect moment that continuously arises in the fullness of love and non-separation.

Once men and women have fully integrated their masculine and feminine sides, they are able to move back and forth between the two at will, when either is needed in a given situation. This ability allows the feminine to open fully and the masculine to become the essence of freedom....both in the same person regardless of gender. Therein lies the possibility of Sacred Union and higher purpose for the good of all beings, and is the ultimate expression of BE-ing.
Posted by Gary Stamper at 9:48 PM