Where are the models for the New Masculine? 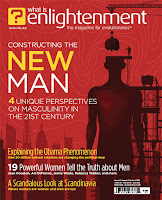 In my workshop, Integral Warriors, I'm often asked by men who want to shift their perspectives on their own masculinity who the models are for the New Masculine. It's a great question.

In What is Enlightenment? magazine (issue 41, October 2008), Ken Wilber and Andrew Cohen address the question of What It means to be a Man, Redefining the Masculine Principle at the leading Edge of Cultural Evolution (pg 36). In that discussion, Andrew Cohen says, that in researching the article, it was "very hard to get men, even those who seem to be very sophisticated in their cognitive capacity, to express some example of what they thought an evolved man would look like."

I agree with him that, because of post-modernisms feminizing the masculine, there is a cultural block and fear around stepping up and embracing the greater potentials of the masculine.

One of those problems, from my perspective, is that 3rd stage masculine looks like 1st stage masculine from the vantage point of 2nd stage masculine. Ken points out that postmodernism prevents us from using wisdom judgement (discernment) and discrimination around our inherent capacities, in this case our masculine essence. As 2nd stage men, we have worked so hard to suppress our masculinity, that we can't see the positive aspects of our Masculinity.

Some argue that both the masculine and the feminine should drop away into a state of oneness, the non-dual, or enlightenment, but before that can happen, we have to do the work that heals our wounded masculine and feminine selves, or we can't get to that enlightened place. Of course, there are rare individuals who can embody the non-dual without having to re-integrate their inner essences, but most of us have to work at it. The danger of not doing the work for the majority of us is that we skip the developmental stages required to fully integrate and we wind up in spiritual by-pass: all light, no darkness.

And it should be obvious to all of us that the light cannot exist without the darkness.

So, let's come back to the original question, "where are the models for the New Masculine?" The very same question could be asked of the feminine, who, at 2nd stage, has integrated their own inner masculine.

In an evolutionary sense, this is all new territory, and we, the men and women who are doing this work, as teachers and students, happening at the leading edge of consciousness, are the ones who will determine what this evolutionary shift looks like. As we step into this work, willingly and consciously, we become the models for the new masculine.

Last note: I don't claim to have all the answers for this. Like so many, and both a teacher and a student as we begin to step into this.
Posted by Gary Stamper at 2:50 PM

On Cohen et al, and the allegedly integral masculine:

I wish you weren't anonymous...(what's with that?). I read both, and while he makes good points, he also takes some of Deida's quotes out of context. Don't get me wrong, I don't agree with ddeida all the time any more than I agree with Wilber all the time, but both have enough GOOD stuff to make them very, very important. To dismiss them entirely would be a mistake. I did order the book, tho'.

Matthew Fox has a new book called "the Hidden Spirituality of Men" that I just ordered. Like I said, we're creating the model as we go.

How about Johnny Depp? In an GQ article, Depp asks "where are our icons like Steve McQueen, Frank Sinatra or Clint Eastwood. I'd say he is one. Can you imagine them as Depp's Willy Wonka?

Read this in the paper today:

"Dillinger fits perfectly into Depp's personal canon of larger-than-life rebels and outsiders. Depp's done more than almost any other actor in Hollywood to expand the on-screen concept of masculinity, bringing "guyliner" to mainstream America well before Adam Lambert ever appeared on "American Idol" as well as a vision of male heterosexuality that maintains an element of the feminine and tons of rebelliousness."