The Shadow of the Spiritual Warrior 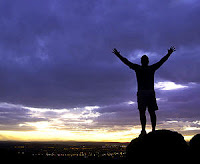 I've been wrestling with the shadow of the Spiritual Warrior. I've been wrestling with myself, as well, trying to define just what is the highest response to this unholy alliance between right-wing political ideologies and right-wing Christian movement in the United States today that confuses soldier and warrior, prophet and soldier. What's the highest conscious response from a moral, ethical, and spiritual place of being available to me?

Twenty-five years ago, when Pat Robertson and other radio hosts and televangelists began talking about a new political religion to create a global, Christian empire, Dr. James Luther Adams, a former ethics professor at Harvard Divinity School, who fled Germany in 1936, warned of the coming rise of American fascism and religion's role in that rise.

As one example among many, the Christian men's movement, The Promise Keepers, and it's founder, Dr. Tony Evans, a Dallas minister, talks about creating a Christian state. He teaches that America should be governed by biblical concepts and that "dominion" has been given over the "elect" to rule the Earth and America in particular. Dominionism has also found a home with George Bush, Tom Delay, Pat Robertson, and Zell Miller, and more recently Sarah Palin. Pat Robertson has stated, "our aim is to gain dominion over society."

Within the dominion context, Christ is portrayed as a warrior and is very appealing given the loss of manufacturing jobs, lack of affordable health care, the lack of educational opportunities and poor job security. The ideology is appealing because it offers hope and sanctifies their rage. One only has to look at the birthers showing up at town hall meetings, shouting everyone down and sometimes carrying guns, all with the intention to shut the other side up and intimidate.

Other manifestations of this pathological warped warrior ideology are America as Empire, anti-scientism, the popularity of the apocalyptic Left Behind novels (60 million copies and counting), the attacks on gays and lesbians reminiscent of early Nazi Germany, and the promulgation of the patriarchy in all elements of culture, religion, business, and politics.

In his book, The Hidden Spirituality of Men, Matthew Fox writes:

"Examining the the situation in Nazi Germany, Adams was very critical of liberals who talked of dialogue and inclusiveness and lacked the backbone to confront what was really going on. "The power and allure of evil and the cold reality of how the world worked was being ignored by such platitudes." He also criticized prominent research universities and the media in Nazi Germany; he considered these institutions too self-absorbed and compromised by their coziness with government and corporations, so that they were completely unwilling to raise the moral questions of justice and inequality."

It is this mentality that seems to be showing up in our own media, our own legislators, and, disappointingly, perhaps even in our president, who seems to think he can still pull everyone together in a well-meaning wave of bipartisanship. Unfortunately, the right-wing Christian Political movement has no intention of engaging in any kind of meaningful discussion.

"All debates with the Christian right are useless. We cannot reach this movement. It does not want dialogue. It cares nothing for rational thought. It is not mollified because John Kerry prays or Jimmy Carter teaches Sunday School."

The biggest danger, he believes, is our complacency.

Also disappointing, from my perspective, is the the complacency I see within the Integral community. I fear we have not yet evolved far enough into a second-tier perspective that says, "while we recognize the essential contribution and value of each level of consciousness to the overall spiral of development, we also recognize that we must stand up and speak out against pathologies and shadow that threatens others."

Instead of a false war waged on a shadow projection of "secularism", what if we, as a nation and a world, made war on poverty, global warming, racism, and on forces that would co opt the true meaning of the spiritual warrior substituting hate for justice and love? There are plenty of injustices for real warriors to wage.

What are we waiting for?

(note: My deep thanks to Matthew Fox who contributed so much to this post through his book "The Hidden Spirituality of Men" and helped me formulate my thinking)
Posted by Gary Stamper at 10:03 PM 6 comments: