There are some things that Western "heroic" medicine does really good. Integrating with proven "holistic" methods may not be one of them.

It's been 12 days since my total left hip replacement surgery. One of my goals going in was to be in the best possible physical health and shape I could be in given my age, knowing the impact that would have on my recovery. Since I have no previous surgeries, I have nothing to gauge my recovery, but my doctor tells me I'm recovering quickly.

One of my other goals was to get off opioid pain killers as quickly as possible, so I did a lot of research on holistic and natural pain relief and spoke to other holistic practitioners that I've known a long time and respect and wound up with several alternative possibilities, including my old staples of Arnica and Rescue Remedy, CBD oil, and something I'd not heard of before, "Ghost (or Indian) Pipe." Last, an old standby that I hadn't considered, THC, or marijuana.


When I talked to my surgeon about these homeopathic and ancient remedies before the surgery, I wasn't surprised by his reaction. He had not heard of any of them except Arnica, and then only as a topical ointment. To his credit, he had his staff do a quick search on them all but then came back recommending that I stop all of them at once and discontinue for at least 4 weeks after the surgery.

Also to his credit, I received two types of pain killers: Oxycodone - Stronger and one of the most addictive opioid pain medications - and Tramadol - milder and not an opioid but acts in the same way, including an addiction risk.

When I woke after surgery, I felt fine and was immediately helped up to take a short "walk" with my new walker and my nurse. The next morning I was still feeling "fine," ate a good breakfast, spoke with several of the attendants who wanted to make sure I understood what I was going to be doing when I got home and familiarized me further about my prescribed medications. Nobody had really prepared me for the amount of pain I was going to have when the residual anesthesia from the surgery eventually wore off.

I immediately took the recommended doses of the Oxycodone, one in the early afternoon, and one before bed that night.

Upon rising (sort of) the next morning, I decided that the zombie state created by the Oxycodone was just not going to work for me, so I switched over to the Tramadol. That worked fine for the next couple of days and nights but I was just on the edge of being too knocked out by it, so I cut the doses back by half and added the Ghost Ship tincture in with it. Now, Ghost Ship tincture doesn't really mask the pain, but, rather, allowed me to set it aside and just notice that it's there as if I were an observer. I had noticed similar results from deep meditation, which seemed perfect to me, so I just added it to my medication practice. A couple of days later, I decided to try the same thing with THC and found exactly the same results.

As I continued to heal (So-o-o slowly, I thought), I eliminated the THC and just relied on the half doses of tramadol, and finally to where I am now, just taking the Tramadol when I need it as the pain comes and goes with the amount of inflammation I seem to be having.

I fully get that this is anecdotal and may not be the way anyone else experiences the way these substances interacted and don't recommend you try this, and were it not for my hip surgery, I surely wouldn't have experienced any of this.

Oh, and by the way, as soon as my hip has healed, I'll be going in for a partial knee replacement and we'll get to start this process all over again.

Posted by Gary Stamper at 6:38 PM No comments:

Hillary Clinton: Still Patriarchal After All These Years? 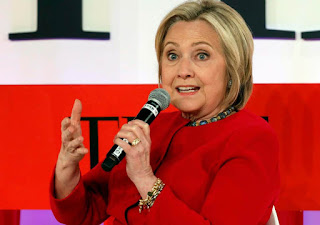 I’ve watched Hillary Clinton from afar since the early days of Bill Clinton’s presidential candidacy, as First Lady, especially through Bill’s infidelity, the accusations from the right and the impeachment, a US Senator from New York, paid special attention to her journey through the presidential primaries running against Barack Obama,  as Secretary of State in the Obama administration, the 2015 Presidential Campaign where I initially supported Bernie Sanders in the primaries and ultimately voted for Clinton in the election.

I have contended, and still do, that the reason Hillary lost the Democratic party nomination in 2012 , and the 2016 election against Trump was because she did not have her feminine on board. She came across hard and unyielding—like a man—where in 2012 Barack Obama was not only able to show his masculine side but was also able to display a softer, more compassionate side—his feminine—and the voters responded. In other words, a woman candidate who exhibited the unhealthy and patriarchal version of the masculine and had not re-integrated her healthy feminine side was not appealing to most voters.

in 2016, one of the reasons she lost to Trump was also because she was unable to open to her feminine and voters felt that if they were going to vote for a man, they would vote for an actual man, not a woman who largely acted like a man.

"I'm not making any predictions, but I think they've got their eye on somebody who is currently in the Democratic primary and are grooming her to be the third-party candidate. She's the favorite of the Russians."

I have intentionally used the word “attacked’ because that’s exactly what it was.

From CNN: “In the intervening controversy caused by her comments, Clinton hasn't put forth even any real explanation for why she decided to say what she said about Gabbard much less any proof of her claims.” link

The CNN article then asks “Why would Clinton -- one of the most powerful and recognizable leaders in the Democratic Party -- make a not-at-all-veiled allegation that Gabbard is being "groomed" by the Russians to run as a third party candidate and, in theory, make it possible for Trump to win a second term?”

In the wrap up, the article states

If Clinton has actual evidence that Gabbard is in fact being groomed by the Russians, she should by all means come forward with it. Because that would be a big story!

if Clinton is simply making an allegation based on hearsay and rumor, well, that's a deeply irresponsible thing for someone in her position to do.

There’s no way this wasn’t planned. It was obviously calculated. It‘s also highly likely the interviewer was in on it and that it was scripted to at least some degree.

What if all of this is conjecture? A reasonable person could look at just the turn of events and decide that this is worth having an intelligence agency look in to. To take this and call it out publicly without actually having evidence is just too “Alex Jones Style” conspiracy-theory- like and people will soon see through it, and the blowback from the public will likely drive the last nail into the coffin of her campaign.

If it is just conjecture, this is what the old “Patriarchal” version of Hillary Clinton would do, and it’s hard to believe that she has experienced the kind of transformation required to make such a shift. I say this partly because I understand that many women who have integrated their masculine have integrated the only version of the masculine that has been modeled for them: The Patriarchy, with all of its shadows and pathologies. Unfortunately, there are still very few models for the authentic, healthy masculine.

In short, she’s using and demonstrating the same kind of tools and methods Trump would use. The main irony in this scenario could be that Clinton’s unproven claims have thrust Gabbard back in the spotlight and apparently even a chance to move forward in the polls.

If  Hillary does indeed have actual evidence, wouldn’t turning that evidence in to the proper intelligence agency be the most prudent and responsible course of action? Of course, there’s no way of knowing for certain at this point whether or not Hillary talked to Intelligence sources about Gabbard, but it seems unlikely that she did and then went public with the information, possibly hampering any potential investigation.

Another question that needs to be considered is, “Where’s the advantage in attacking a low-polling candidate?"

Tulsi Gabbard has made some questionable moves here, as well, like appearing on the Tucker Carlson show on Fox News to defend herself against Hillary’s claims.  I’d like to hear how that happened. Tucker Carlson recently claimed there’s no White Supremacy problem in America, that it’s “a hoax ” created by the media and the left, all while having guests on his show that defend white supremacists.  Sounds like a radio interview I'd love to do....

But being a frequent  guest on the Tucker Carlson show has buoyed her support in right wing circles, including an endorsement from white nationalist leader David Duike (which she disavowed), Joe Rogan, and Jack Dorsey, the chief executive of Twitter.

RT, the Kremlin-backed news agency, mentions Ms. Gabbard frequently for a candidate polling in single digits, and some right-wing trolls and anti-Semites fawn over Ms. Gabbard, praising her willingness to criticize Israel. In April, the Daily Stormer, a neo-Nazi website, took credit for Ms. Gabbard’s qualification for the first two Democratic primary debates.

Insiders say she’ll run, and 77% of Democrats back her candidacy. She can't help it... it's her entitled destiny.

Other information about her popularity at this time is unavailable, but remember that at the peak of her influence, the NY Times called her “an instant presidential front-runner.”

It looks to me as if she will run, and once again, it’s all about winning. That much is plainly in play with her attack against Tulsi Gabbard last week, What will voters think about this? I don’t think you beat Trump by “out-trumping” him. If we don’t like him because of what he does,  what makes you think we’ll like you any better when you do the same ugly things?
So who is Hillary Clinton today? Is she displaying the patriarchal qualities of the old masculine, the bully, the tyrant King archetype, the cold, calculating Warrior archetype undeterred by the compassion of the healthy feminine? Is she just more of the same? A wolf in sheep’s clothing?

After eight years of Barack Obama and three years of Trump, it’s not an unreasonable question. Don’t forget George W. Bush’s famous quote: “fool me once, shame on — shame on you. Fool me — you can’t get fooled again.”

Read the inspiration for this article here

Posted by Gary Stamper at 10:59 PM No comments: