The largest virtual men’s gathering of elders, teachers and luminaries in history 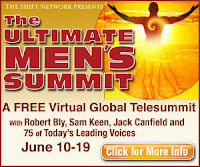 Are you ready to be a 21st Century man (or empower the men in your life to be one)?
I’m excited to share that more than 75 remarkable global leaders such as Robert Bly, Jack Canfield and Sam Keen are coming together for an historic Ultimate Men’s Summit to chart the path forward for us – all for free.
As men, we are waking up to our true gifts – and stewarding the emergence of a new era. We’re evolving a new form of masculinity – one infused with integrity, authenticity, generosity and virtue. And we’re living more purposefully and finding ways to serve a cause greater than ourselves.
It’s not an easy path. We’re learning as we go – transforming our past, exploring our inner truths and expressing our strengths in new ways. We’re learning to lead boldly without dominating, feel fully and freely, and use our power to protect instead of destroy. And we have further to go – both for the sake of our liberation and the world’s.
That’s why I’m thrilled to invite you to attend the Ultimate Men’s Summit – a free 10-day teleconference June 10-19. I’m one of the presenters at this historic virtual gathering of more than 75 teachers, authors and elders who will offer their hard-earned, no-holds-barred wisdom about manhood, masculinity and personal development.
Click here to sign up now for this FREE virtual event - the largest men’s summit ever:
http://ultimatemenssummit.com/feature/Gary-Stamper
You’ll also learn from inspiring and transformational trailblazers like Neale Donald Walsch, Gary Zukav, Dan Millman, Hal Stone, Andrew Harvey, John Perkins, Claudio Naranjo and Gay Hendricks (plus a few great women such as Riane Eisler).

I hope you'll join me for the Ultimate Men's Summit. It's a fantastic opportunity for you to take part in accelerating the transformation of men into a new era, which will also help you achieve the ultimate version of yourself - successful, fulfilled, generous, awake and strong.
Of course, the Summit is open to women as well, who are warmly welcome to join us and learn more about 21st Century Masculinity. It’s clear we need to work together with women, hand in hand, to create a new Earth.
Each speaker will offer their deepest insights about what it takes to mature and grow as a man, and they’ll give you specific practices you can use to move your life forward. They are making it very practical and real – not just talking heads – helping you to accelerate your growth, evolution and expression as a man in the world.
The link again to register is:
http://ultimatemenssummit.com/feature/Gary-Stamper 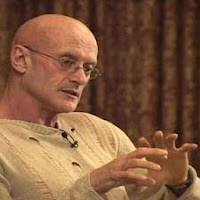 Anyaa and I just returned from a weekend in Boulder with Ken Wilber where, for the first time in 21 years, he spoke of his experiences around Conscious Love in his relationship with his wife, Treya, and their battle with Treya's Stage 4 cancer diagnosis ten days after their marriage, and their struggle around it.


The weekend was primarily scheduled around Cynthia Bourgeault's amazing book, The Meaning of Mary Magdalene: Discovering the Woman at the Heart of Christianity,  and was billed as "Mary Magdalene and the Path to Conscious Love." it was a great opportunity for both of us to meet Ken Wilber for the first time, and for Anyaa and I to share more of her work around Mary Magdalene.

The Reverend Dr. Bourgeault spoke eloquently Friday night about her book and Mary Magdalene and and her role in Christianity that is been suppressed for so many centuries. Bourgeault's intriguing  portrait of Mary Magdalene recognizes her distinct, yet intertwined roles as Jesus's disciples, apostle, and intimate beloved. Mary Magdalene's unique contributions to spirituality invite us all to discover a revolutionary path of transformation through love. She explored the relationship between Jesus and Mary, meditation, and kenosis (self- emptying love), and the uniquely Christian non-dual wisdom practice.
Cynthia and Ken have both personally experienced intimate relationships that forever shifted their spiritual practice. Her relationship with the Trappist monk, Brother Rafe, taught her how to embody a living Christian contemplative path; Ken's account of his loving relationship with Treya as she succumbed to cancer has touched millions in his book, Grace and Grit. By weddng the spiritual and the intimate, not only do these relationship have striking parallels to each other, they also embody the relational path of love modeled by Jesus and Mary Magdalene. The most radical claim of this path of conscious love is that it's open to all.

When Anyaa and I first met online, one of the things we immediately had in common was a love of Ken Wilber’s book “Grace and Grit.” It was, frankly, one of the things that attracted me to initially contact her. Ken’s reading from Grace and Grit, on Saturday afternoon, tearful and passionate, later spurred more conversation between Anyaa and I about why we came together and what our Sacred Purpose is.


We talked about how amazing it was that we initially came together partially because of Grace and Grit, how it had helped form our own paths into conscious relationship, and how incredible it was that we were in Boulder to hear Ken speak about his own experiences after 21 years of silence. It was difficult to think that this was just a coincidence.
Very early in our relationship, we had several conversations about the state of the planet and what we thought was unfolding, mostly around unsustainability, and that what was unsustainable, would eventually collapse. This was a test for us, to see if we shared what we thought was, and still do, a realistic shared worldview.
Anya had no desire to be with another New Age Guy and wanted to be with a spiritual warrior. Someone she could grow with through the coming times. Gary wanted to be with a powerful conscious woman in community where they could build the base to survive and thrive through those coming times to help plant the seeds for the much-needed next stage of consciousness to emerge on this planet. Having done many past life regressions together where one or both of us had died for what we believed in, we have chosen to no longer be martyrs, something I'm sure many of you can relate to. And while we are still willing to die for what we believe in, we also believe that it's a higher strength and consciousness that challenges us to live for what we believe in.

We believe that part of our sacred purpose as a couple is to help usher in that new dimension, and that we are called to that by not only surviving and thriving, but assisting others to our own Full Moon Sanctuary Ministry. We've been further  inspired by Andrew Harvey and his path of Sacred Activism and Networks of Grace, and by Carolyn Baker who does transition counseling as her main practice through her book Navigating the Coming Chaos: A  Handbook for Inner Transition, with forward by Andrew Harvey and highly recommended by Carolyn Myss.


Anyaa And I highly recommend ALL of these life-changing books.
Posted by Gary Stamper at 6:19 AM No comments: