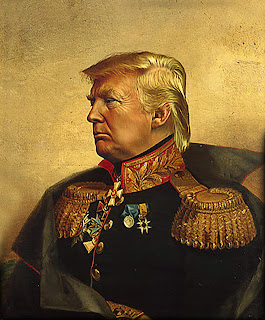 I awoke this morning, my brain still in a fog, and in the middle of my morning coffee I realized:

"I'm living in a monarchy."

Well, whaddya know?... Donald Trump could shoot someone on the streets of New York and get away with it.

Make no mistake, even though Donald Trump has been brazenly acting like a monarch long before he became president, he was crowned last night even before it's become official.

I'm deeply saddened that these men and women decided to violate their oaths of office and dismantle the constitution and yet I understand why, and it's not pretty.  I understand why friends and family members who I love dearly and will continue to do so even though they supported this fraud of a man who measures his success by his ability to dominate others in his "winner takes all" mentality.

I understand why fundamentalist evangelicals "sold their souls" for this false god. I understand that any hope of possibly stopping our self-inflicted "omnicide" from climate change has been dashed.

...and I'm saddened to know how they're gonna feel when Trump's pathologies are turned on them as it will.

I shudder to see what despicable act the newly crowned monarch who is blind to his own deathwish will foist upon us.

The country born overthrowing a monarch just changed its mind and he can do whatever he wants. There is no balance of power, no one to stop him... except the people, many of whom know they just got fucked.

Time to go to work because it's the right thing to do... breathe...
Posted by Gary Stamper at 12:50 PM No comments: