Enabling is Still Co-Dependent, Even At The Integral Stage 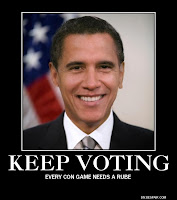 Some of you may be aware that Terry Patten, an acknowledged leader of the rapidly changing Integral Movement, recently created a website called Integral Obama:Integral Evolutionaries for Obama 2012. If you haven't already visited that site and read Terry's impassioned plea to integralists to support President Obama, I invite you to do so now, so you can get a better idea about what I'm writing about.

The first paragraph of terry's argument begins, "The purpose of this website is to offer integral evolutionaries an opportunity to support the re-election of President Obama by speaking with a single voice. Why Obama, again? And why should we, as “integral evolutionaries,” pool our support?"

This seems like a good place to make a couple of points: Unlike some who have commented that integral shouldn't be taking sides in politics, like all good integralists, I'm coming from a place where I believe that, while everyone has a piece of the truth and no one has the whole truth, some truths are more true than others, and so I'm not opposed to Terry supporting Obama per say. At the same time, I also recognize that, as integralists, our obligation is to the health of the entire spiral, not just integral.

There are also some whom are so turned off by Terry's message that they say they are abandoning integral altogether. To those I say, you  never embodied integral in the first place.

Terry goes on to lay out his reasoning for his position, acknowledging Obama's good and only lightly acknowledging there are bad points, ultimately believing "that he is still the best hope we have for more integral policies and politics." If you've read his well-thought out argument, as I asked you to, there are many valid points to Terry's position. A couple of them are:
These are great reasons to not vote for Romney, but are they valid reasons to vote for Obama, no matter how much we may like, or want to like, the man? The problem in taking this approach is the "Effective Evil" paradigm.


In a very recent and excellent piece on AlterNet ( Sept.10) titled "Effective Evil" or Progressives’ Best Hope? What to Make of Obama's Presidency, a conversation guided by Amy Goodman, Glen Ford of Black Agenda  Report and Michael Eric Dyson, professor at Georgetown University, spar over Obama's record. Dyson makes Terry's argument, that "Obama is as progressive a figure who has the chance of being elected in America," and that we need to be "in the game," while Ford postulates that Obama isn't the lesser-evil, but rather, the more effective evil, who has, in fact, moved the entire debate to the right. Ford goes on to say that Obama "is the more effective evil because he is able, being a Democrat, to accomplish more of that right-wing agenda than the Republicans ever could," and has. It didn't take long for Obama to take the single-payer option of healthcare off the table, or for Social Security and Medicare to be put on that same table, something Republicans have been trying to do for years.Our first obligation, Ford goes on, is to tell the truth, not just get in the game as the rules of the game have been laid down by either corporate or the political parties---or both.

“I think it is dangerous to confuse the idea of democracy with elections. Just because you have elections doesn’t mean you’re a democratic country.” --Arundhati Roy

In Terry's initial plea to integralists to throw their support---and their money---to helping re-elect President Obama, Terry does not address the dark side of the Obama administration: appointing a questionable cabinet, some of whom are to blame for the 2007 economic meltdown, refusing to hold these architects---banks and Wall Street criminals---of the economic collapse, responsible for crushing dissent in Amerika, for reneging on closing Guantanamo and moving George W. Bush's policy of detention without trial to one of assassination without trial---including American citizens, secret kill lists, the NDAA, drone wars, amping up spying on U.S. citizens, making Bush junior seem like a...well...bush leaguer, and so much more.

"In the hierarchy of evil, consigning someone who has been convicted of nothing to a cage year after year after year, until they die, is high up on the list. And in that regard, this latest episode demonstrates not only the ongoing travesty of the US's war on terror policies, but also the dishonesty of the attempt to exonerate Obama for those policies."

Former CIA Chief  Michael Hayden, Bush’s former director of the Central Intelligence Agency and the National Security Agency, says "President Barack Obama has closely followed the policy of his predecessor, President George W. Bush, when it comes to tactics used in the “war on terror” — from rendition, targeted killings, state secrets, Guantanamo Bay to domestic spying."  Hayden’s remarks give credence to what many who cared about the topic had already realized: Obama largely mirrors Bush when it comes to the war on terror. More detainees have died at the camp (nine) than have been convicted of wrongdoing by its military commissions (six). This is the fourth detainee who has died at the camp since Obama's inauguration. But, hey, he's a democrat and we like democrats who have balls, right?


"You don't stick a knife in a man's back nine inches and then pull it out six inches and say you're making progress." --Malcolm X

As if there are that many differences between Obama and Romney, here are 100 ways they are just alike...

At this point, what will go down as Obama's biggest contribution to history is a merging of the banks and the state, with $16 trillion (to date) being infused into these banks, into Wall Street, under his watch, and the line between corporations and the federal government virtually disappearing.
And yet we say we must vote for Obama because he'll protect the rights of women, and we point out that he could very well appoint two or three Supreme Court Justices. Like occasionally and accidentally drone-killing women and children isn't a global assault on women, that undeclared wars with Congress' support---despite the rhetoric---are okay and they aren't really wars if no American soldiers die as in Libya. And we've all seen and continue to see how the courts are already stacked against the people, and if Obama's initial staff appointees don't thrill you, what makes you think his SCOTUS appointments will?

We've been asked, because we're integral, after all, to take the bigger picture a vote for Obama because we have an opportunity to be heard; to express the integral vision.

What if there's a Still Bigger Picture than even that?

We definitely have a choice, and I suppose one's approach to that choice is determined by what one thinks, or believes, is happening in the realms of energy, environment, and economics, perfect storms all coming down on us at once. Let me state right now that I still believe there is time to turn this perfect storm around before we collapse, but only if we address these problems immediately, and I don't see any indication of that happening. The highly dysfunctional U.S. political system, which is paralyzed and hostage to corporate power is unable to respond rationally to the crisis or solve “even the most trivial of problems,” much less the problems that threaten our very survival.

We can't even face these problems, much less act on them. We're in a national state of denial, and a relatively small number of us have reached the next stage of anger, with even fewer stepping into acceptance. It's looking like the economic path of unlimited growth and credit on a finite planet is the one that will take us down, possibly within weeks or perhaps months. It would be nice to be able to "err on the side of a more constructive type of creativity," but it may already be too late for that. We can't "grow" our way out of this.

So maybe we're down to the proverbial frog in the pot: Do you want the water turned up slowly so you don't notice, or would you prefer to have it turned up quickly enough so that everyone can notice and can jump out of the pot? Imagine what might happen if all those fading middle and poverty class Romney voters realize they've been fucked over by their own party! We might find ourselves united very quickly. The only power the controllers have is the power we give them, and here it's like we are the enablers to our addicted-to-growth selves.

The Way Up is All The Way Down

Look, I'm not saying you shouldn't vote for Obama, or that the Integral Community---whatever that is---or integral individuals and organizations shouldn't work to make things better, try to inform, try to  change, or make things more sane than they are...What I am asking is that WE TELL THE TRUTH. I don't know if Obama is a bad man. I want to like him. He may be be powerless and under threat, but there's only one political party and their common ground is fascism - rule by corporations over the government. Obama and Bush both serve(d) the same money masters for the same goals. Obama and Romney are no different. We must stop glorifying our abusers and speak the truth.

I'd like to suggest that while we do the work of changing the world that we integralistas also move our efforts into getting smaller, not bigger: Creating local communities that become more self-sufficient, less dependent on government, and more dependent on each other; Models of what it means to live integrally, holistically, able to have peace and love but also able to say "no" and back it up when it's needed; communities who grow their own clean food, where integral folks get involved in local government, building the model from the bottom up instead of throwing money into what's looking more and more like a dead political system, investing that money in yourselves and your communities. Invite your families, your relatives, your friends, your integral homies...create a new world: one that doesn't depend on the dying infinite growth monetary paradigm of endless credit. Even if there is no single instant of collapse, the present system is already finished. We've come to an end of a paradigm, a brief moment in history enabled by cheap energy, full well knowing that what cannot be sustained, will not be sustained, that the whole thing is already collapsing. Will you collapse consciously, on purpose, or be dragged, kicking and screaming, helpless, like so many others who are afraid to tell the truth.