California has a Golden Opportunity to Prove Liberalism Works---or Not.

A strange thing happened in California last week: Democrats gained control of both the state's legislature and the state's governorship at the same time, and conservatives are already warning about what a disaster that will be, but will it?

The 2012 elections have revealed several things: that the country is becoming more liberal, that the conservative approach of trying to pit us against one another isn't working, and that changing national demographics have resulted in the republican party being labeled as the "party of old white men" (as an old white guy I resent this!). This repudiation of prejudicial and radical conservative views should be a lesson for liberals and progressives in places like California, because the pendulum swings as a result of the failures of whatever political party happens to in control at the moment.

One reason the Republican Party has fallen so hard, is not because there isn't value in conservatism, but because they forgot that---despite its flaws---there's also value in liberalism. But part of the conservative plan to dominate politics was the creation of what they called "the culture wars," a construct design to separate the country into "us vs. them."


"what’s most amazing is that these very issues that once helped to rally conservatives to the polls and “vote against their economic interests” are now more effective in drawing liberals to the polls. Social conservatism has been increasingly marginalized in American society and politicians are gaining much less traction pushing these issues. The passage of two marijuana legalization measures – in Colorado and Washington – and referendum support for gay marriage in four states shows that the days of GOP culture war wedge issues is coming to an end." (link)

The right---not the "far" right---has considerable soul searching to do. If the Republican Party refuses to move away from the vitriolic hate speech of the Limbaughs and the Hannity's, getting rid of the neanderthals that have dominated the party up until now, they will continue to lose relevance with the culture shift---younger, less white, and more liberal---happening in the country, and it will be caused by the very issue of fear and hatred they've been running on. Time's up. Change or die, because this is just the beginning.

"If someone believes Barack Obama is a socialist, Communist, Marxist, Muslim, radical, black liberation theologian, non-citizen, illegitimate president or Manchurian Candidate, forget about him. He may have a shot at a career in talk radio, but he's not going to make it in California politics." (link)

So back to California. California has a golden opportunity to prove that conscious liberalism---not political correctness or the mindless egalitarianism that says all opinions carry equal weight---but a liberalism that is mature enough to recognize the value of differing opinions, of the value of following rules, the value of creating abundance as opposed to greed, and providing real value to all of California's citizens. Because if the new supermajorities in California government are tantamount to handing your teenager a credit card, the checkbook, and the keys to a car that will take them to an all-night orgy, they will be replaced---if there's anything left.

Get smart, California. Prove liberalism works, because we'll all know if it doesn't... and as California goes, so goes the nation.
Posted by Gary Stamper at 2:37 PM 1 comment: 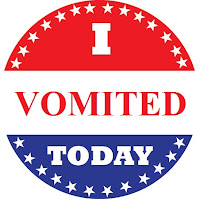 I'm writing this on election Day, Nov. 6th, 2012, while wondering which authoritarian corporate warmonger will wind up "leading" the country for the next four years. Yes, you're reading that right. I'm done voting for the lesser of two evils, because even a vote for "the lesser" is still a vote for evil. I'm also thinking about The East Coast and the aftermath of Sandy, the Superstorm, hoping that the suffering of so many will lessen soon, and that things will return to normal as soon as possible. Silly me...things will never return to "normal." We---us, the nation, the world---have passed the point where things will ever be "normal" again.

I also wonder how so many people in New York and New Jersey find them selves without food, water, gas for generators, and so much more after being warned about what was coming ten days in advance; why they chose to ignore the warnings and did not do even the smallest amount of preparation? Are we so locked in denial and our arrogance that we simply refuse to believe these things could happen to us and our communities? I wonder how many people---perhaps even you reading this---now see the "frankenstorm" as a wake-up call to do at least 3 weeks of "prepping" for whatever might come along?

We are now going through a remarkable time in humankind's history and we are being asked---no, challenged---to wake up on all fronts: emotionally, spiritually, physically, and intellectually. Our survival depends on it. We are being challenged to evolve, and evolve we must, or we will perish. We won't be the first. Several versions of Hominids---we're a Hominid---have gone extinct on the planet.

The evolution of our species is the only thing that can save us. It has become painfully obvious that Einstein was correct when he said, "“You can never solve a problem on the level on which it was created.” Our problems are overwhelming us.

On that cheery note, I'm creating a new website called "Collapsing into Consciousness," a member-based forum---with free sections---to help people learn how to take care of themselves and others. The forum membership pages will be broken down into categories and, ideally, each category will be managed by someone who is an expert or a very knowledgeable person in that category. Some of the topics the forums will include are Sustainability Memes, Evolutionary Metaphysics, Community, Resilience, Prepping, Economics, Energy, Environment, and much, much more, all designed to help conscious individuals to get more conscious while learning how to navigate what's already begun. As soon as the website is up---in the next month or two---I'll be inviting others to participate by being forum managers, and once we have those in place, we'll go live.

In the meantime, here's a gift for you to get started:
TEN STEPS TOWARD COLLAPSING INTO CONSCIOUSNESS

1. Build your internal bunker: The new world will present unprecedented emotional and spiritual challenges. We need to do our inner work, especially around shadow.
2. Physical preparedness: Don't underestimate the logistical challenges. Start now if you haven't already. Work on becoming resilient and self-sustaining. Are you where you need to be?
3. Get out of debt: Debt and our current financial system is designed to keep you enslaved. Take control of your finances.
4. Get local: Think globally, act locally, especially around food and community.
5. Commit to simplicity: Evaluate your possessions and determine what you'll need and what will be a burden. We all have too much crap, anyway.
6. Commit to establishing relationships that support your preparation.
7. Commit to your relationship with your physical body: Some sort of daily exercise or movement. Get in shape.
8. Develop the practices of kindness and gratitude: They will come back to you.
9. Create something beautiful every single day: In service to life and each other.
10. Speak up: because your soul knows what's right.

This article appears in the November 2012 Integral Warrior newsletter.
Posted by Gary Stamper at 4:05 PM 2 comments:

Posted by Gary Stamper at 11:09 AM No comments:

A New Future is Evoving....

Posted by Gary Stamper at 8:14 AM No comments: