DON'T LEAVE HOME WITHOUT IT!

The joy of needing to use the facilities in Panama 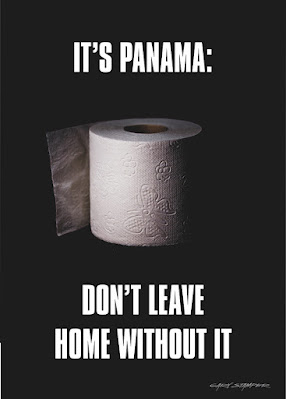 I learned very early to carry toilet paper with me whenever I left my apartment for more than a couple of hours. This is one of those "cultural things" nobody tells you about when you're researching living in a foreign country and I never thought to ask. No harm, lesson learned.

Having been in Bocas Del Toro 2 weeks shy of a year, I now know where there are available restrooms all over town. The okay ones are in some bars and restaurants, and the better ones are in some of the hotels. Forget stores and markets. Non-existent except for the largest store in town which is home to the first "public" restroom I found in town and where I learned about carrying my own toilet paper. Forget about washing your hands, there are no soap or paper towels there, either. Fortunately, there is hand sanitizer at the entrance.
Thanks to having to travel to Panama City from Bocas to complete my Permanent Panamanian Residency, I recently had the "pleasure" of making two 20-hour round trip bus rides across much of my new country of residence. 10 hours going, 10 hours back, and the buses were always full. Fortunately, these are modern-day "megabuses" with bathrooms... with a catch.

The bus conductor (driver) compartment area is cordoned off and locked to the passengers while the bus is moving and each bus has a "concierge" who occasionally comes back to announce stops or to unlock the bathroom for passenger use when requested, admonishing each user that there is no defecating allowed on the bus, only urinating. So buses, apparently at the whim of the driver, may make 1-2 food and restroom stops during the 10-hour journey. The only other stops the bus makes are for other passengers getting on and off the bus. 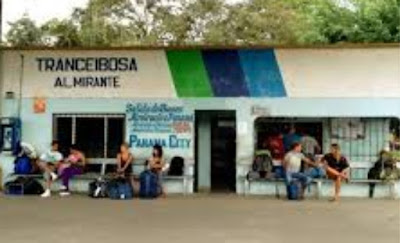 Now, these stops are in remote small towns, and the restrooms and the restrooms rarely show any evidence of being cleaned, toilet paper, paper towels, soap. and often have sinks with no running water. You're really on your own, here, and when you're done, you can order food, if you'd like. But I saw no evidence of any restaurants having separate washrooms for employees and the latex surgical gloves that many wore were of small comfort to me.

One of the worst restrooms was owned by the bus company. While it did have toilet paper and a working sink, it did lack two things: hand towels and a light bulb. I had to use my phone flashlight to light my way.

So why did I use the bus? Why wouldn't I just fly to Panama City and back? At the time there was only one flight a day departing to Panama City and one flight a day arriving from Panama City. That would have meant flying in one day, taking care of my business the next day, and flying back out the following day. Cost? About $140 each way, three days shot and two nights in a Panama City hotel. With the bus, I could sleep most of the way, arrive, take care of my business, and be back for the night bus to Bocas, and sleep my way back. Cost? About $28 each way period.
Also, I spent two weeks in Panama City when I first arrived in Panama getting my initial residency legal work done, and I didn't really like the city. Panama City is very expensive and a mixture of elites and abject poverty. Panama City has been working on becoming the Shanghai of Latin America, and it's well on its way as it is the largest city in Latin America and a global financial hub.

That's fine, but it's not why I came to Panama.

I came for the Caribbean beaches of Bocas del Toro, the laid-back Jamaican vibe, and the people - ex-pats and native Panamanians - and the bus experience gave me valuable insight into Panama and I would never get that on a flight to and from Panama City.

For me, it's all about the experience.

Posted by Gary Stamper at 2:38 PM No comments: