Creating a Border "Win-Win" for Republicans and Democrats 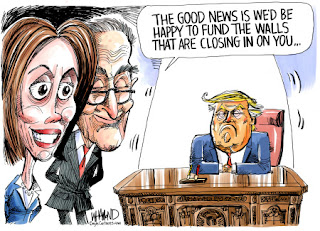 As I write this, Donald Trump - and his propaganda arm - Fox News - continues to blame the Democrats for the shutdown. You remember the shutdown, right? The one where Donald Trump said that he would "proudly" shut the country down if he didn't get his way on the wall and not blame the Dems? I saw him do it "live" on TV, and you probably did, too...it was everywhere...and then he reneged!

I find it so "Trumpian" not only because the Democrats have made their position on the wall very clear, but mostly because the last time I looked, the GOP still controlled all three branches of government...but still somehow can't get wall legislation passed "because of the Democrats."

Mr. President, you're in control, why don't you pass it?

Oh, yeah, you don't have enough votes even from your own party to get it passed, and yet, you have the audacity to continue to blame the other party. Perhaps you should look in your own backyard.. ah, but we know that's not going to happen: because like always, you need someone else to blame.

You take credit for everything, but responsibility for nothing.

I have little sympathy for the Dems and even less for the GOP, but there's a patently obvious solution around this manufactured impasse, and I can't believe no one else has suggested it, except that, while it may be patently obvious, it may not be easy.

The first caveat is that this can't happen until after January 3rd when the Dems take control of the house, and that solution is for the house and the Senate to first agree on legislation.

There's so much both parties have agreed upon in the past, that if we remove the wall and the myth that Dems don't want border security out of the equation, it should be easy for the new Dem-controlled House and the GOP-controlled Senate to come to an agreement. The GOP Senate has already put forth a bill without the wall. That's the one Trump would not sign. It was the House that put forth the bill with the wall. After January 3rd, when the Dems take over the House, that will no longer be an issue.

With an agreed-upon bill between the House and the Senate, Trump can still either not sign or veto the bill. If all the President does is refuse to sign the bill, it still becomes law unless the session runs out. If he vetoes the law, Congress can overturn the veto if no one changes their vote, the bill would then become law without the signature of the President.

If Trump manages to veto the legislation after Congress sends it to him, he then clearly owns the consequences and those GOP House and Senate members who helped send the bill forward can distance themselves for the president's action.

This brings us to the second caveat: It takes a two-thirds majority vote by Members present (provided there is a quorum) to override a presidential veto. When one house fails to override, the other house will not attempt to override, even if the votes are present to succeed.

Now why in the world would the Senators or Republican House members come together with the Dems to get a two-thirds majority?

Many of the people who are getting hurt the worst by the shutdown are trump supporters, and it's unclear how much they will be willing to bear before they cry "enough."

Republicans biggest fears around Trump are two-fold: One, the fear of being Primaried by their own party, and two, being called out by Trump's vicious tweeting. But recent information indicates that behind closed doors, GOP senators privately believe Trump is 'nuts. Yes, it's taken a while for them to realize what many of us already knew, and while that may not affect the "cult of Trump," they may want to think twice about being seen as a card-carrying member of that kool-aid drinking group.

If Trump loses a veto effort, he looses enormous power, and elected GOP members will likely gain. Most importantly, the nation will gain, and it will be easier for these elected officials to distance themselves from Trump and his more intractable followers, some of whom are elected officials, of course.

The alternative is that the intractables who hold office and simply won't distance themselves from Trump may very well go down with him, and some may even wind up being charged as accomplices.

Posted by Gary Stamper at 8:49 PM No comments: