This is the promo video for my book, "Awakening the New Masculine: The Path of the integral Warrior." It will be submitted to the Next Top Self Help Author contest on February 1st.

I'll be asking for support by way of your vote and will let you know when and how when it's time. Meanwhile, thanks to all of you who have commented to me via email on the first two chapters here. The support has been absolutely wonderful!

Gary
Posted by Gary Stamper at 7:37 AM No comments:

Email ThisBlogThis!Share to TwitterShare to FacebookShare to Pinterest
Labels: the Integral Warrior

My Father Died This Morning.... 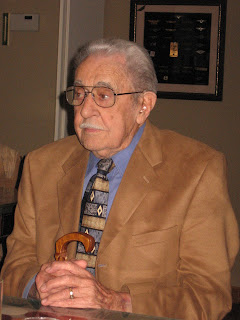 Wayne E. Stamper, 1919-2011
I got the call from my sister on the West Coast, about 9:15 their time. She told me our father had passed away in his sleep between midnight and 1am. We knew it was coming, and soon. He turned 92 last Friday and had been in the care of Hospice for a few months, and took a turn for the worse a couple of weeks ago. The cancer they couldn't find for several years had turned up in his stomach, and it was bad. They had him on heavy morphine for the last two weeks.
I've been calling him almost daily. His voice had been getting more raspy for the past few years, but the morphine had made it almost impossible to make out his heavily slurred words. Our communications over the past couple of weeks had been limited to "I can't hear you" from him, to "I'm sorry, Dad, I can't understand you" from me. There were a lot of silences where we just stayed on the phone knowing we were connecting without having to say anything. It was hard, though.
We thought we were going to lose him a few months ago when the doctors told my sister it was time to call the family in, that his kidneys had failed and he probably wouldn't make it through the night. When he did, I jumped on a plane, flew to Sacramento, rented a car, and got up to Redding where he was in the hospital. He didn't die. Hid kidneys somehow restarted amazing the doctors. We got to spend two days together. He was in and out of consciousness, and we got to talk about life and death. He wasn't afraid to die. I told him how different cultures and religions viewed death and about some of the philosophies around dying. We got to talk about his life, about my childhood, and I got to honor him - deeply - for his gift of great fathering, expressing my deep gratitude to him for being the father so many never get to experience in this world of under-fathered and over-mothered boys. 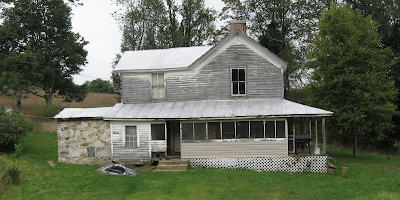 He  was born in Comers Rock, Virginia, in 1919. The house he was born in, built by my grandfather, Peyton Stamper, a farmer and a Baptist Minister, still doesn't have indoor plumbing and is in pretty bad condition. It's pictured above. We got to visit it on our honeymoon last August, when I took this photo. I found it on Google Earth. He was the second of seven children, and only two survive now. He was a depression teenager and had pleurisy. At 17, knowing he had to get well and out of the Virginia hills, managed to con his way into the Navy. He did get well. 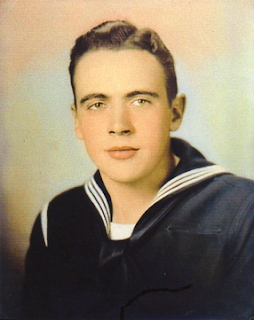 A Pearl Harbor Survivor, he was showering when the klaxons sounded, and he thought, "what a time for a drill." He dressed, and got up on deck just in time to see bullets from a Japanese Zero strafing the deck in front of him. He was a turret captain on the USS St Louis, and they were the first ship out of Pearl harbor after the attack, as a decoy, where they knew the Japanese submarines were waiting for them. The photo below shows the St. Louis, at the right, underway out of the harbor. The St. Louis saw a lot of South Pacific action in WWII and became known as "Lucky Lou, the ship that couldn't be sunk."
He went on to teach naval Science at the California Maritime Academy in Vallejo, California, not far from Mare Island Naval Shipyard, before retiring as an honorary Lt. Commander after 20 years in the Navy as a Chief Gunner's Mate. Knowing he had two children to send to college, he became a successful businessman, first owning his own businesses and later in Real Estate. 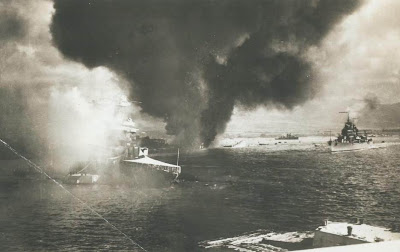 My dad was always my best friend. We never had the problems many of my friends had with their parents. He was a loving, kind father. He wasn't perfect, but who is? He was perfect for me. He was a great role model while I was growing up and remained the same when I became a man. I could always talk to him, and he to me.
If we are truly able to choose our parents for the lessons we need to learn in this lifetime, then I chose very well. I got to tell him I loved him many. many times over the years and in the past few months and days. I will miss him, and I will always carry him with me. I am disappointed he never got to read the book I'm writing, Awakening The new Masculine: The Path of the Integral Warrior. He would have loved it.

'We do not know where death awaits us: so let us wait for it everywhere. To practice death is to practice freedom. A man who has learned how to die has unlearned how to be a slave." - Montaigne

I love you, dad. Travel well. 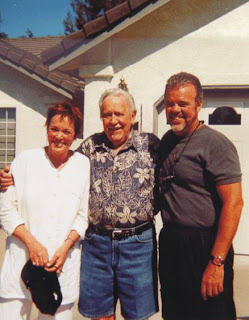