To Vax or Not To Vax, That is The Question, and Delays in Bocas Del Toro Pfizer Vaccinations 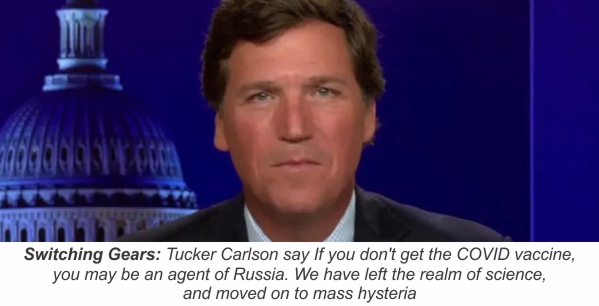 With all of the virus misinformation (I'm being kind) from all quarters, and the extreme politicization and rampant conspiracy theories, I have been reluctant to get vaccinated.

I'm well aware that in the United States, a long list of diseases have been nearly eradicated by vaccines: diphtheria, polio, bacterial influenza, measles, mumps, rubella, smallpox, and tetanus, among others. I'm definitely not an anti-vaxxer.

I'm also aware that pharmacological companies are notoriously well known for corruption and greed, lying, knowingly harming people, placing profits above people, and that they bribe (okay, so bribing is legal thanks to Big Pharma lobbying... it's still bribery through campaign donations). A quick internet search will give you an idea of just how rampant the problem is, and it's by no means limited to the pharmacological Industry.

Very early on in the pandemic, I started researching ways to boost my immune system. As much as possible, I've eaten a primarily organic diet for almost 20 years and have not had a cold or flu for ten years or more. I realized early on how important diet was to our health. I tried to stick to specific foods for specific results. At 76, I'm still not on any prescription meds, and when I see new doctors they are amazed because apparently, that's very rare for men "of my age."

What I call my "COVID-19 Immunity Building Protocol" (read about it here) seems to have served me well and kept me safe as I have successfully navigated a 5-day cross-country road trip, a temporary move to Texas (sometimes known as the Covid Capital of the U.S.), and an international flight and relocation move to Panama during the height of the pandemic with absolutely no repercussions - that I'm aware of - from the virus.

I'll be the first to admit that, with all of the above, I have a certain amount of what I'm thinking of as "invulnerability syndrome" (my superpower?).

It apparently comes from growing up in the Boomer generation, and it was said that boomers thought they would never die. (disclaimer: Strictly speaking, I'm not a boomer, I was born just before WWII ended. Culturally, I'm definitely a boomer). Many of us know differently now, but ingrained cultural customs, habits, and beliefs die hard.

I imagine I may carry natural immunity, as many do. Not everyone gets sick. Not yet, anyway, but with new variants like Delta, it's possible that immunity to one variant does not guarantee immunity to the next variant, and in a world where warming guarantees new variants and viruses (possibly contributed to by intentional "gain of function" experimentation where Murphy's Law reigns), this, and more, as I've written before, is far from over.

To Vax or Not to Vax

My vaccination quandary was solved this week by two new developments, but there are others as well.

The first was a reversal by a lot of Republicans that formerly held anti-vax views, including red-state governors, GOP members of Congress, and even (gasp!) Fox News' official new stance encouraging everyone to get vaccinated. Not all right-wing adherents agree, but one of the reasons the new position is taking hold is that the unvaccinated are now the primary source of new Delta variant infections mostly occurring in red states, the second reason my quandary has cleared.

In other words, their former position is now killing their constituents. 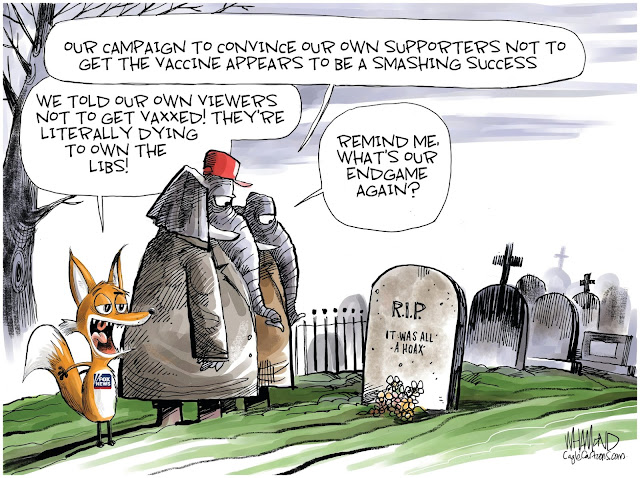 As welcome as this turn-around in vaccine philosophy is, let's not forget that it's not out of their goodness of heart, but rather, knowing that it will be difficult to win elections as they're being blamed for the death of their constituents. How strong is this as a motivator? Alabama Governor Kay Ivy, who emphasized ten days ago on a visit to Birmingham that there's no need for an incentive plan to increase vaccination rates in Alabama, is now blaming the unvaccinated for the stunning increase in cases.

As Fox News hosts and anchors, GOP members of Congress, and other right-wing pundits were decrying the loss of freedom with vaccinations (they did the same thing with seatbelts, remember?), many were secretly being vaccinated, and even now refuse to disclose whether they've been vaccinated. It's not that they're saying "I haven't been vaccinated," it's that they have refused to answer when asked "have you been vaccinated?"

Last, It's obvious that the vaccines are working. The case rate statistics prove it. New cases, even in Blue states where vaccination rates are higher, are increasing, but at a much lower rate than Red states where vax rates are significantly lower. And almost all of the new cases in both Blue and Red states are limited to the unvaccinated.

Getting Vaccinated in Bocas Del Toro

I'll take my chances with the vaccine. We can now see that getting vaccinated are much better odds than going naked, or unvaccinated .

The upcoming Bocas Del Toro Pfizer vaccinations have been postponed, with no exact date set yet. Hopefully, it will be here in late August.

This is due to recent storms, as some of the buildings in Almirante and Changuinola that were going to be used as vaccination centers are currently flooded.

Over 5,000 homes and 26,000 people were affected by ongoing storms and flooding in Bocas Del Toro. Isla Colon and Bocas town where I live has largely been spared from flooding... so far.

I intend to get my first shot at that time. I'm also doing it to protect others, a benefit that has been revealed in the U.S. over the last few months in the face of the new Delta Variant.

It's not that the Pfizer vaccine prevents one from getting the virus. it doesn't. It apparently lessens the severity of the virus with some people experiencing lighter symptoms , and some no symptoms at all, and that lightens the death toll and helps ease the strain on healthcare and the economy although people who have been vaccinated can still be infectious and still spread the virus.

I still contend that we're an impatient species that requires everything "on-demand." and that includes completely opening up everything right now. We need to get over that. Mask up, distance, and be careful until we get this under control. so we can pay more attention to the other threats facing us.

We are on the Hero's Journey, and we are on it together.

The hero's journey is a common narrative archetype, or story template, that involves a hero who goes on an adventure, learns a lesson, wins a victory with that newfound knowledge, and then returns home transformed.

It is imperative that we return transformed from the journey lest it be for naught, because of what we face as we "come home" to life after the pandemic. and the next hero's journey.

The Pandemic (including the Delta Variant) is probably the most important issue facing us at the moment. Unless we get it under control - and soon - there will be no economic recovery, no next hero's journey. We must have as much economic stability as possible to prepare for the other issues that threaten us, each an existential threat by themselves, nevermind that they're all swoopping down on us at the same time.

We cannot do it divided, and it can't happen if we care selfishly more for ourselves than each other.

We must do this together.