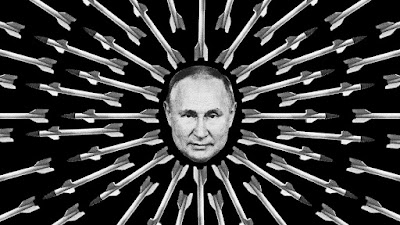 Even though the continuing invasion of Ukraine is, without a doubt, the biggest story out there, rather than load up my Facebook page with individual war stories, that most of you don't read, I've decided to put together a "digest' of sorts of articles I think are most relevant on my blog and then post it on FB. Like it or not, Putin's vile actions have the potential to literally affect every person on the planet.

But make no mistake. Even though this war is primarily about three things: Putin's ego, his desire to see Russia restored to its former glory as a world SuperPower, and the real mistakes of western (primarily U.S.) foreign policy by the last four administrations. We need to take a long look at the shadow policies of our own corrupt empire.

MOTHER JONES: Is It Amnesia or Hypocrisy That Fuels the GOP’s Crazy Response to Putin?
Hint: It's both. In recent days, as Putin has threatened a conflagration, top conservatives and GOP officials have practically pinned “I’m-with-Vlad buttons” onto their lapels.

AXIOS:  Ukrainian troops were holding off a massive assault from Russia's military in Kyiv
Streetfighting erupted in Kharkiv after President Vladimir Putin's forces entered Ukraine’s second-largest city on the fourth day of the unprovoked invasion.

Ukraine's Defense Minister Oleksii Reznikov said in a statement praising Ukrainian resistance Sunday, "Where are all those who promised to capture Kiev in 2 hours? Where are they at? I can't see them. ... The darkness will retreat. The dawn is near."

GBN: Vladimir Putin orders Russian nuclear deterrent forces on alert amid tensions with the West over Ukraine invasion
Speaking at a meeting with his top officials, Mr. Putin asserted that leading Nato powers had made “aggressive statements” along with the West imposing hard-hitting financial sanctions against Russia, including the president himself. The Nuclear Option.

FORTUNE:  War in Ukraine could displace more than 1 million people into nearby European countries
With 350 million Ukraine refuges already on the move, Europe is bracing for what could be an exodus of more than a million refugees.

YAHOO NEWS:  Western sanctions push Russia and China even closer together
Vladimir Putin's invasion of Ukraine will increase Russia's already significant economic reliance on China, but a growing Russian dependence on China could cause friction between the two countries down the line.

YAHOO NEWS:  As Russia invaded the Ukraine, bitcoin and other cryptocurrencies plunged.
The conflict raised questions about bitcoin's role — as a haven, a tool for the unbanked, and an authority-free zone.