Where Do We Go From Here?
Today I'm going to jump right in and talk about climate change's proverbial Elephant in the Room, death and dying. 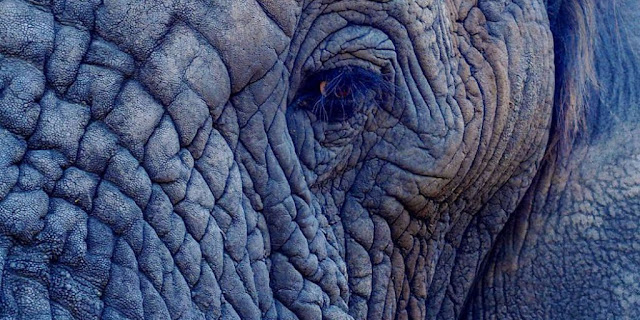 Why is that the elephant in the room? Because for the most part, even though good science and facts are telling us it's possible that humanity might well go extinct in a decade or two, no one wants to talk about it and I get it.

Maybe I'm one of the lucky ones. In my early twenties, I had a near-death experience. I was driving home with my band to Vallejo, California, late one night in our van after playing a club gig in San Jose and we had a flat tire just shy of the Gilman exit in Berkeley. We pulled over onto the wide gravel shoulder of the then 4-lane freeway, and the five of us got out to find that we needed to change the right front tire.

Great team that we were, we all set about to get it done. One of us, I think it was Tom, grabbed the tire and handed it off to John (I think), and I grabbed the lug wrench and jack and crawled belly-down under the front bumper in front of the wheel to set the jack under the frame.

That's when I heard someone yell, "he's going to hit us!" The next part was initially vague but I remember being aware that I was tumbling out of control in what seemed like a slow-motion movie. No pain, just what I came to realize years later was pure witness state, and for the few split-seconds it must have taken, I was just an observer with no attachment to what was happening. I remember that part like it was yesterday.
I must have passed out because the next thing I remembered was waking up laying face down on the freeway. I looked up and saw cars skidding and swerving around me and I passed out again, and remember objectively thinking, "I'm dying."

I woke again, still on the freeway, and there were paramedics around me doing whatever it is paramedics thankfully do. From that point on they asked me questions, shined a flashlight in my eyes, loaded me onto a gurney/stretcher and into an ambulance to the emergency room at the hospital. When I asked about my band-mates, I was told that they were fine.

It wasn't until the next morning that I learned about the extent of my injuries. I was remarkably lucky. Apparently, I had been dragged face down in the gravel, had 2 wheels pass mostly over me, and was thrown about twenty feet onto the freeway surface.  I had suffered only superficial face damage with lots of scabbing, some bruised and cracked ribs, and the doctors' removed a gravel stone from my neck that barely missed a carotid artery.

We were hit by a drunk driver at about 50mph who thought we were the off-ramp... He suffered a steering horn ring through his chest, but survived.
We were lucky. No one died, and I got to go home that day. Randy, our guitarist, who tried to get out the way was caught by one of the vehicles and had a shattered hip that took months (years?) and several surgeries to recover from. Tom, our keyboard player, was standing in the back of the van having just passed the spare to another band member when the car hit us and he luckily only had a broken jaw and some other minor injuries. I don't remember anyone else being hurt badly.

The point is, that for a moment, I thought I was dead or dying. The experience completely altered how I view dying and death. Through the years I've come to realize that death is not to be feared. It's the other bookend to birth, that hopefully includes living a life well-lived, something far too few people have the opportunity to do. I am privileged to have had that opportunity. My "near-death experience" was part of what led me into meditation and Zen Buddhism teachings about death and dying.

Most of us aren't "lucky" enough to go through something like that. Until now, that is. Even if we do somehow manage to escape extinction, science is now telling us that we've passed the tipping points that indicate things are going to get bad... very bad, with millions - perhaps billions - dying. 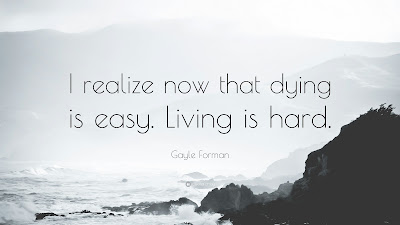 So what is it about dying, especially in the U.S., that's so hard for so many of us to even acknowledge, much less, face head-on? Why aren't we talking about this?

We live in politically-correct times where it's taboo to engage in negative thinking, and what could be more negative in western culture than death? "The Secret" is a 2006 self-help book by Rhonda Byrne, based on the earlier film of the same name. It is based on the belief of the Law of Attraction, "the magical feel-good thinking that unintentionally says we control our own reality that allows us to disassociate from the pain that's already going on in the world. This perspective is nothing more than an ego-centric worldview that says as long as I'm not suffering, the world is okay. What this response is actually saying is that it's someone else's problem (reality), not theirs, and is the worst kind of spiritual by-passing and up-and-out mentality that infects so many of us." I wrote about that here in 2011.

"I'm not afraid of death; I just don't want to be there when it happens." —Woody Allen.

We cannot "manage" death. No amount of denial or spiritual bypassing can change that. It comes to us all and as what is really the true "secret," and we can only change how we respond to whatever comes. When discussing the very real possibility of Near-Term Extinction (NTE), it's crucial that we explore all of the implications of what's happening all around us, including the psychological and spiritual implications without watering them down with New-Age bullshit.

In Professor Jem Bendall's IFLAS Occasional paper 2, "Deep Adaptation: A Map for Navigating Climate Tragedy" from 2017" he lays out a brief list of those implications, including non-linear changes that include "run-away climate change." Some of those changes are:

Bendell has chosen to interpret this information as indicating inevitable collapse, probable catastrophe, and possible extinction. "There is a growing community of people who conclude we face inevitable human extinction and treat that view as a prerequisite for meaningful discussions about the implications for our lives right now," Bendell writes.

"...It is not my intention in this paper to map out more specific implications of a deep adaptation agenda. Indeed, it is impossible to do so and to attempt it would assume we are in a situation for calculated attempts at [crisis] management when what we face is a complex predicament beyond our control. Rather, I hope the deep adaptation agenda of resilience, relinquishment, and restoration can be a useful framework for community dialogue in the face of climate change. Resilience asks us 'how do we keep what we really want to keep?' Relinquishment asks us 'what do we need to let go of in order to not make matters worse?' Restoration asks us 'what can we bring back to help us with the coming difficulties and tragedies?' ”

I agree with Bendell that "Near-Term Extinction" is not set in stone, but avoiding it will be JOB #1 for everyone, including governments, institutions, corporations and small businesses alike, cities, towns, and communities... everyone, and I sadly do not see the will for that to happen as we continue to make things worse through continued fossil fuel extraction and usage and continuing to strive for growth, when we need to be planning for de-growth, and like supple bamboo, bending with the inevitable rather than breaking.

In the meantime - preferably right away - read Bendell's paper in its entirety by visiting his website here.

Last, I leave you with these thoughts, no matter how you feel about the above, because everyone should know how to die well.

"A thoughtful person should await death…not with indifference, not with impatience, not with disdain, but viewing it as one of the things that is required by nature. It is not death men should fear, but rather we should fear never beginning to live.” ― Marcus Aurelius

“I do not fear death. I had been dead for billions and billions of years before I was born, and had not suffered the slightest inconvenience from it.” ― Mark Twain