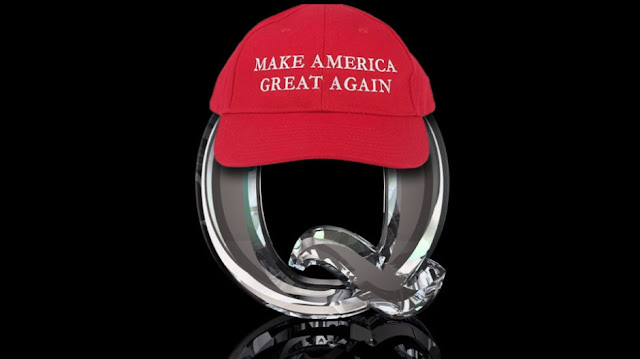 BUSTED. This is the biggest fight we've been in, yet!

For months, election experts have been warning about Donald Trump's efforts to install proponents of his "Big Lie" to oversee elections in key battleground states.1

Now we've learned that several of these candidates have direct connections to QAnon, the dangerous pro-Trump conspiracy theory movement, and that these QAnon candidates have joined forces to "control the election system."2

These are not just a handful of fringe also-rans with no chance of winning. In fact, a total of 21 candidates who deny that President Joe Biden won the 2020 election are running for various secretary of state offices around the country.3 Meanwhile, Trump's political action committees have raised a stunning $122 million that he can use to help them win.4

If any of these candidates are successful, they would be in position to help execute Trump's plot to rig the elections in 2024 and install him in the White House for a second term.

That's why MoveOn is doing something we've never done in our 23-year history: We're launching a multimillion-dollar effort to defeat Trump-backed QAnon candidates for secretary of state across the country and defend our free and fair elections.

Will you donate $5 to help stop the Trump-backed conspiracy theorists from taking over our elections?

So far, at least six of the 21 "Big Lie" candidates running for secretary of state offices around the country have been linked to QAnon.5

These candidates include a former Nevada state legislator who publicly bragged at a QAnon convention that he and others were directly recruited to run by QAnon proponents.6

Another QAnon-linked candidate is January 6 insurrectionist and Arizona state legislator Mark Finchem, who has appeared on a QAnon web show and claimed that elected officials are "involved in a pedophile network in the distribution of children," a key tenet of the QAnon delusion.7,8 Finchem has raised $660,000 for the race so far, which is more than the two leading Democrats combined.9

Meanwhile, QAnon message boards are lighting up with activity to help these candidates win.

If you think that fringe white supremacist extremists like this could never get elected, think again. Many of them have already been elected to state offices, and there are already at least two known QAnon believers in Congress—Marjorie Taylor Greene and Lauren Boebert.

Especially after January 6, we cannot underestimate the threat posed by radical right-wing extremists. That's precisely why MoveOn is going big in secretary of state races across the country to defeat these pro-Trump conspiracy theory candidates. Will you donate $5?

Yes, I'll chip in to stop QAnon from taking over our elections.

Our democracy is on a knife's edge, and secretaries of state who will count every vote and ensure free and fair elections may be the only thing standing between democracy and authoritarianism.

That's why—for the first time in our 23-year history—MoveOn is dedicating millions of dollars to help elect secretaries of state who will put our democracy first and stand up to QAnon.

Please, if you are able, join us by chipping in $5—or whatever you can—to take down the QAnon plot to put Trump loyalists in charge of overseeing elections.

Thanks for all you do.

–Chris, Corinne, Justin, David, and the rest of the team

Want to support MoveOn's work? Donald Trump and his allies are methodically enacting a plan to place some of Trump's most ardent supporters in key election offices that oversee vote counting, have the power to certify—or decertify—election results, and declare election winners and losers. We've launched a powerful, multimillion-dollar campaign to stop Trump. But we need your help to power our effort.

Will you chip in to power our campaign to defeat Trump and the GOP in 2022?

Click here to chip in $5, or whatever you can afford.

PAID FOR BY MOVEON . ORG POLITICAL ACTION, http://pol.moveon.org/. Not authorized by any candidate or candidate's committee.